Life is short. Fuel is expensive. Find out how Unichip Europe can comfortably save you £500 p/annum with our Fuel Economy Mapping, whilst also retaining the benefits of a custom multi-map tune! 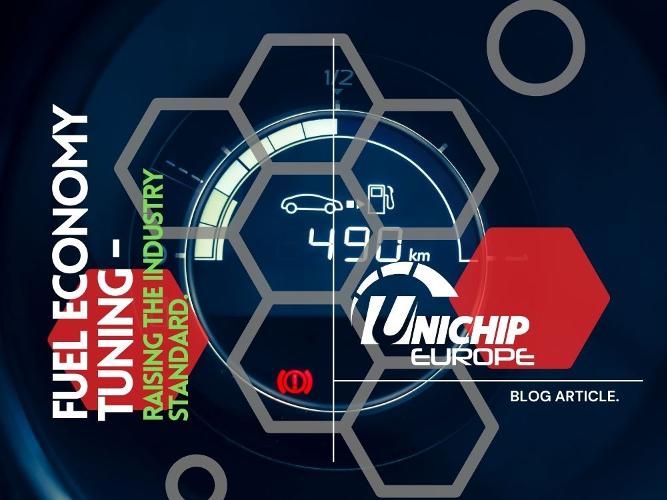 With fuel prices in the UK seeing the greatest daily jump ever recorded on the 8th June 2022, British motorists are now paying an average of £1.89 & £1.99 per litre for Petrol and Diesel respectively.

A staggering 8 out of 10 Brits are dependant on their cars; and, with experts warning the price hike is likely to keep rising alongside energy bills, this is putting both commuters & driving hobbyists in a serious predicament. 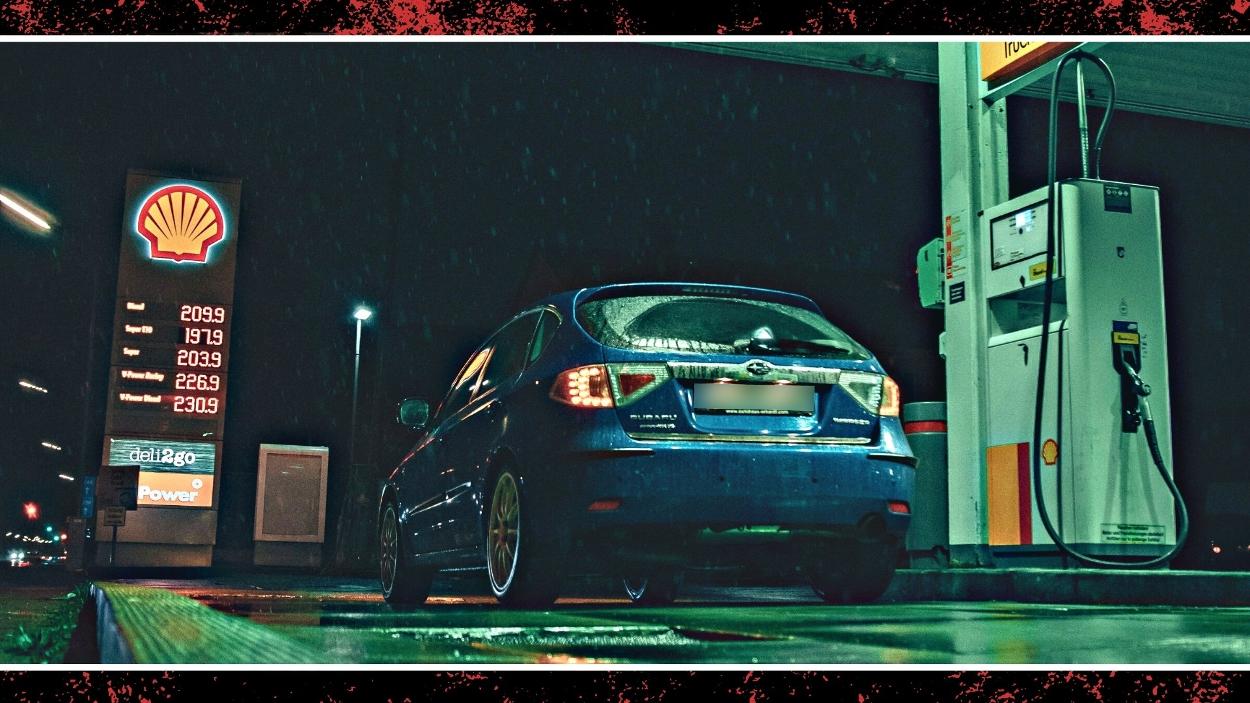 Above: A bad time to divulge that a flight to Pisa from the UK (£35) costs more than half a tank of fuel...?

In the past few months at Unichip Europe, we've been inundated with messages from past customers & future clients about our Fuel Economy Mapping - just 1 of 5 selectable maps that's pre-programmed onto our Unichip Tuning Boxes in order to attain the highest fuel economy possible - given the parameters of your engine.

We've decided to shed some light on it, revealing how it works, map selection, and most importantly, how much fuel you'll be able to save through our economy maps. 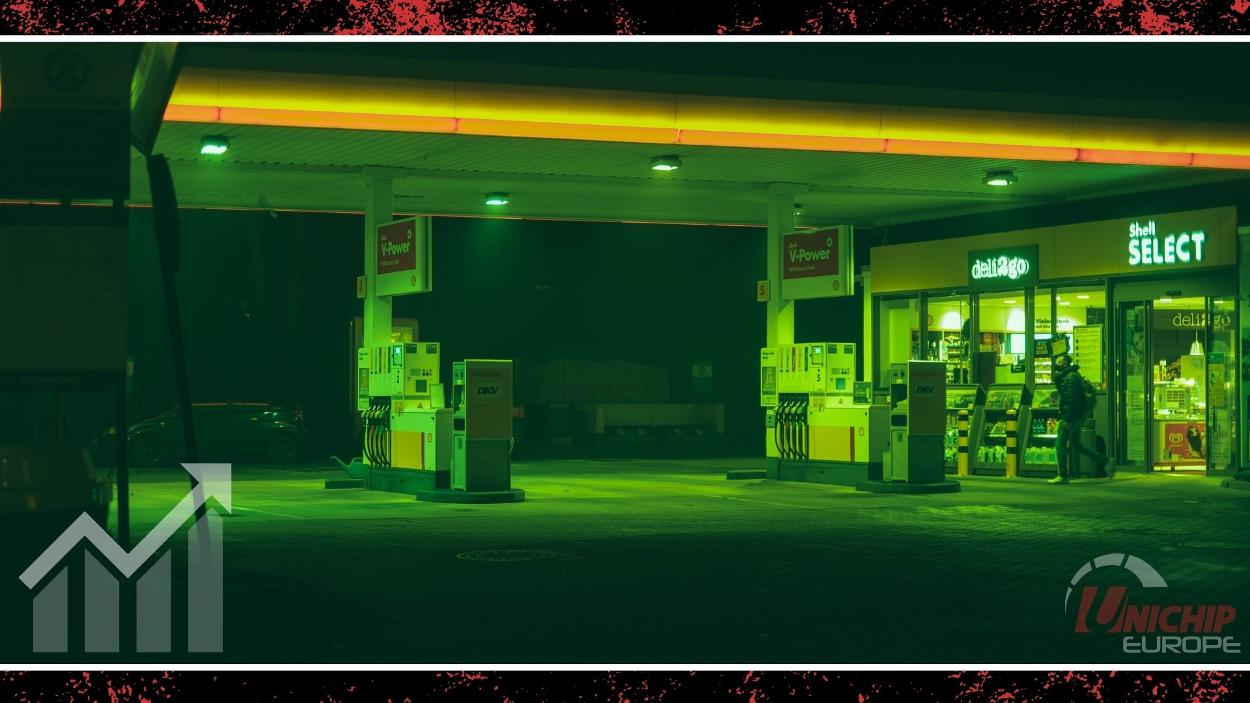 Above: Remember when we were all panic buying fuel? How times have changed...

So - if the pandemic of fuel poverty has got you eating cold beans for dinner because your commute is getting too costly, or you simply can't bare the thought  of seeing your Porsche's keys in the clasps of another man's hand - keep reading...

... because Unichip Europe's Fuel Economy tuning could comfortably save you over £500 per annum, whilst retaining all of the benefits of a bespoke tune created for your specific vehicle.

i. When Will Fuel Prices in the UK go down?

Unfortunately, experts are finding it extremely difficult to speculate when fuel prices will start going down in the UK.

At a glance, there are number of factors causing the increase to fuel prices - economic uncertainty, Brexit, the Ukrainian invasion, taxation & general inflation all play a fundamental role in burning a hole in your wallet.

Know this already? Jump down to the next section to find out more about our Fuel Economy mapping! 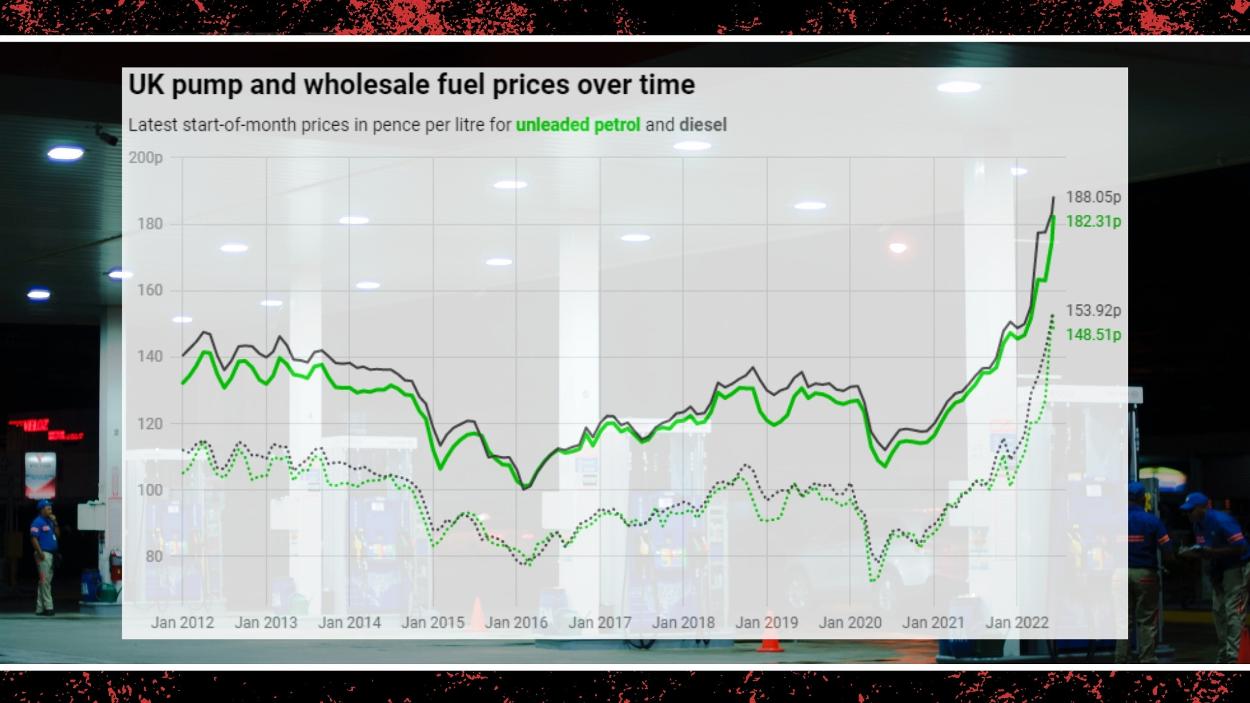 As the UK Economy threatens to go into recession, it's worth noting that 50% of the UK fuel price is solely in tax, with 30% under the guise of "Fuel Duty" & the other 20% in Value Added Tax (VAT).

We mentioned 8 out of 10 Brits are dependant on their cars - and with IBISworld estimating the UK Fuel Wholesaling industry to be worth £58bn annually - it's easy to see why the UK Government have taken the opportunity to pinch a few pennies back.

Did we mention Shell recorded almost triple their profits in Q1 2022 - their highest quarterly increase ever? 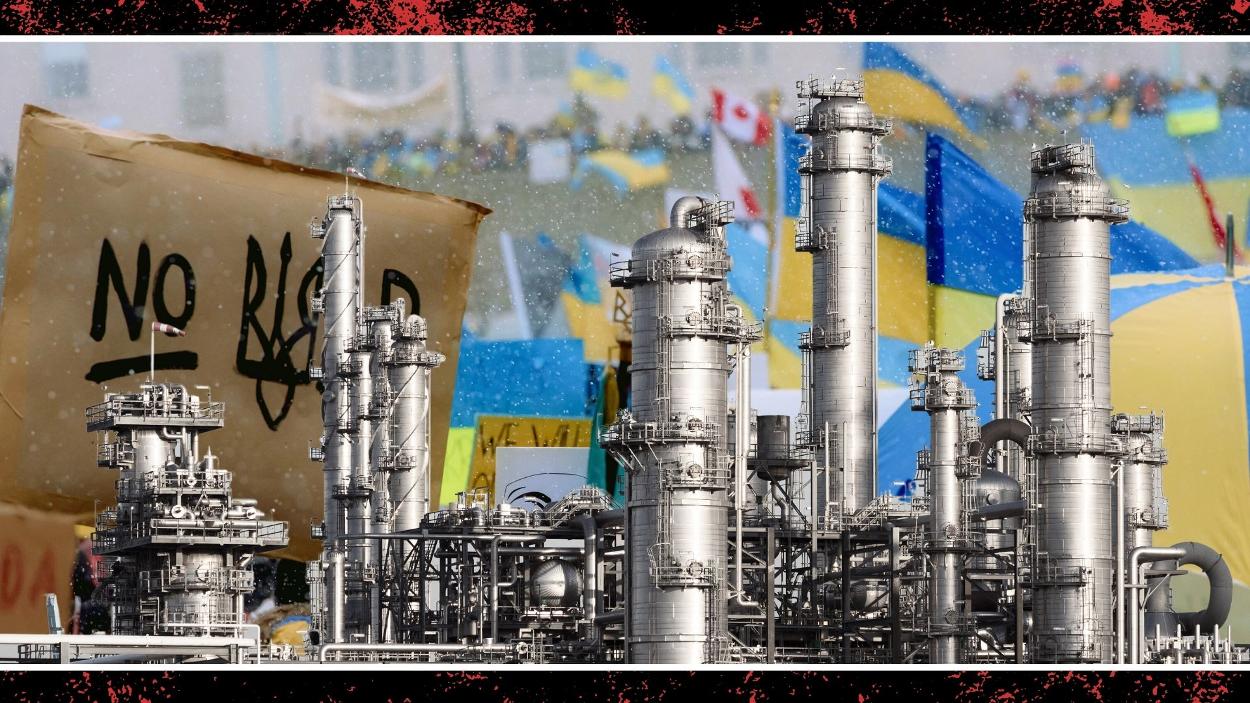 Above: The Ukraine - Russian Conflict is contributing to the worldwide fuel price spike...

As the majority of the Western World continue to impose economic sanctions to Russia, it's put the Motherland in a superposition. Being one of the world's biggest energy exporters, it's allowed their energy oligarchs to both limit supply & increase oil prices in retaliation.

Despite the UK only buying 4% of their entire energy shop with Russia, this time of uncertainty has paved the way for "smaller" energy suppliers such as Saudi Arabia to increase their prices, too. Because you know, supply and demand.

The long and short of it? Globally & nationally, there's a lot going on.

When will fuel prices in the UK go down? When you've solved the Russian Conflict, imposed a tax cut that doesn't collapse the UK economy & written to every major energy supplier demanding their profits be put back into your pocket. Good luck!

If you don't have the time for any of that right now but are still concerned with how much you're spending on fuel, Unichip Europe's Fuel Economy Mapping is the only sure-fire way of attaining your vehicle's maximum fuel economy potential. Keep reading...

Even if you've never been interested in modifying your vehicle, the Unichip should still pique your interest - especially in these times of economic hardship.

Whilst the majority of people outside of the industry assume modifying or tuning your engine is just a way for your vehicle to go faster, there's actually massive scope to improve fuel economy by having a Unichip Module installed. 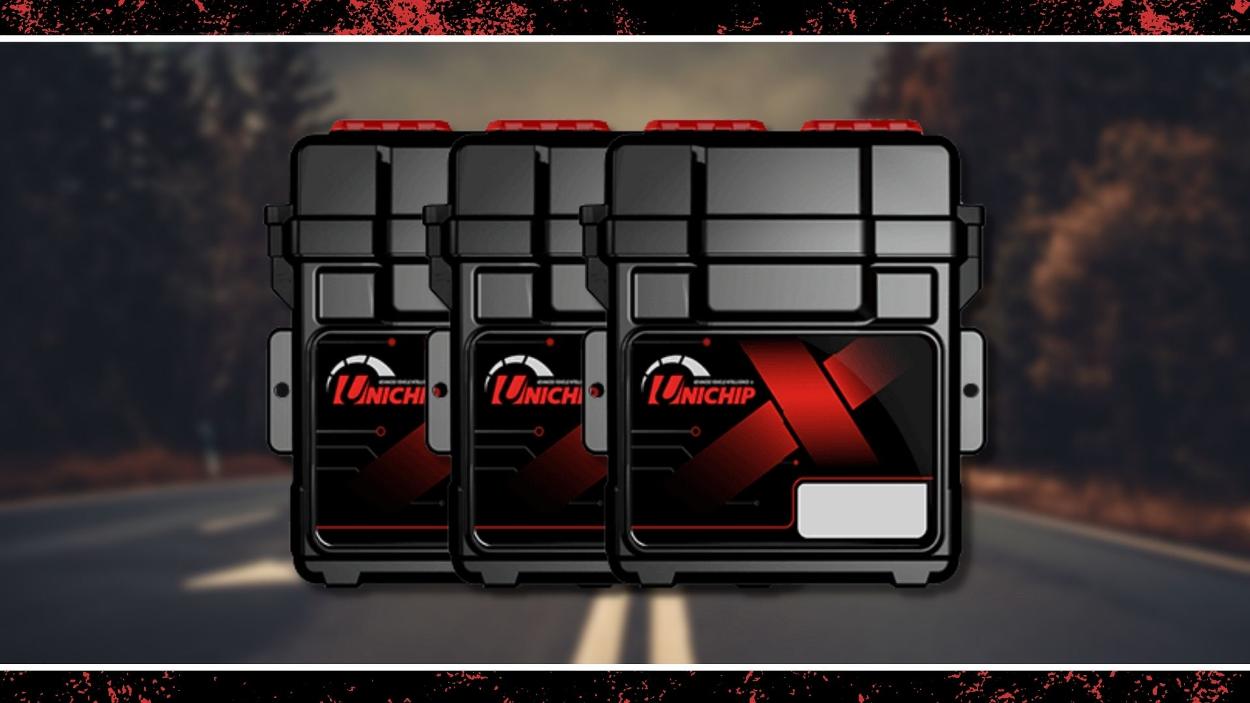 Above: These ARE the droids you're looking for - The Unichip X Modules we install.

Since it's inception in 1993, the Unichip has been installed in over 500,000+ vehicles globally. The Unichip Module itself is a universal multi-processor Piggyback ECU (with rudimental forms of similar products referred to as "Tuning Boxes" or "Chip Tunes").

Whilst this sounds a little daunting for those out of the loop, the Unichip Module is essentially a sophisticated computer that can allow us to modify your vehicle without actually interfering with your engine or it's electronics.

As most vehicles are made homogenously by the manufacturer to abide by various emissions laws, fuel qualities & climate factors in a bid to create a "One-size-fits-all" vehicle that keeps production costs down, there's typically quite a lot of room for improvement when it comes to engine tuning - especially for fuel economy! You can read more about the Unichip & it's capabilities here.

Simply put, Hypermiling is a term used to describe the act of maximising your engine's fuel economy, through driving defensively, minimising braking to retain momentum, coasting wherever possible & reducing your speed on the roads. Some "Hypermilers" claim to see an increase in MPG by as much as 40%.

That's not to say that it has it's drawbacks. Throttle control over long distances can be mentally fatiguing & outright dangerous, as you'll need to be really concentrating on your footwork around the accelerator pedal, whilst monitoring your on-board MPG display & keeping your eye on traffic.

This brings us onto our next topic - Unichip Fuel Economy Mapping...

Now we know what the Unichip is & how to drive economically, we can combine them together. Unichip Europe's fuel economy tuning is significantly more advanced than rudimental flash mapping.

Not only do we create an economy tuning file that's specifically tailored to your vehicle in order to make most efficient use of your engine, it's showpiece involves the manipulation of the accelerator peddle. 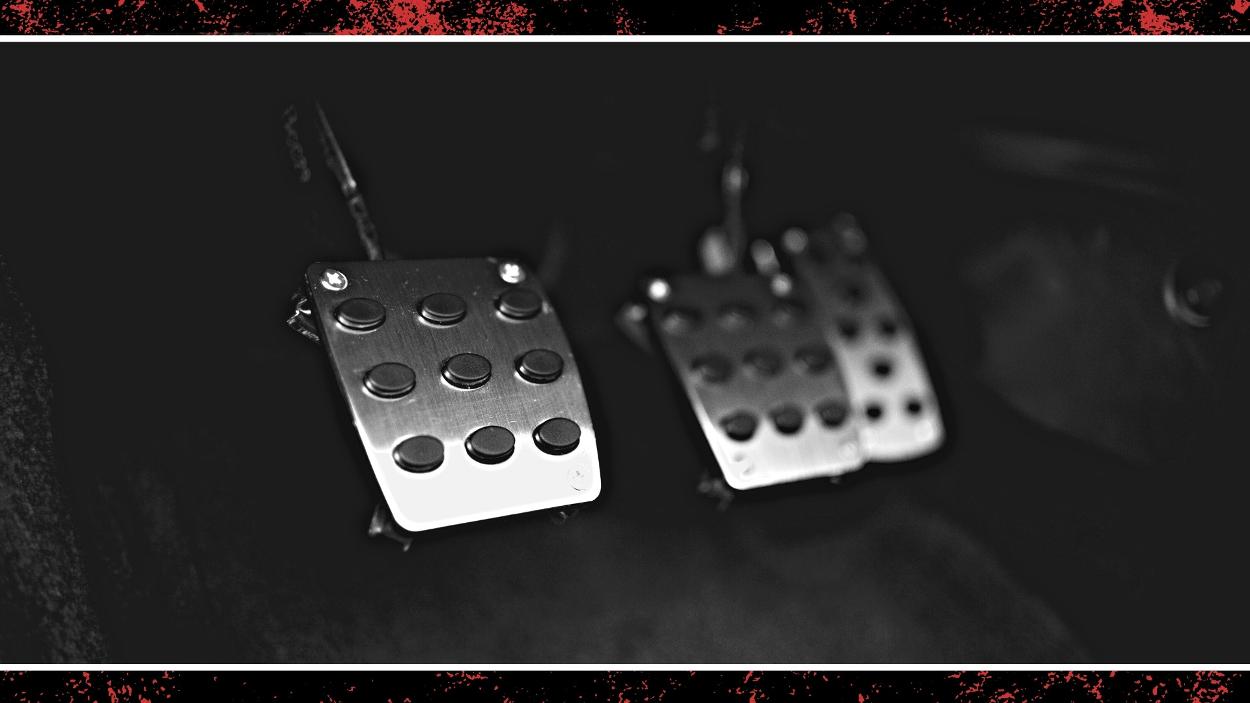 Above: Throttle work's out of the equation with Unichip Europe's Fuel Economy map.

Simply put, the Unichip is able to recognise and negate all of your sudden or jerky throttle pedal movements - eliminating the one variable from stopping you from attaining optimal fuel efficiency - you. We mentioned earlier about difficulties keeping concentration when driving economically; with this map active, you'll no longer need to worry about this.

Combine this with a completely tailored map to your vehicle's condition, modifications & driving style, and you'll be using significantly less fuel - without actually changing the way you drive.

The T6 Ford Ranger makes use of a robust 3.2L Diesel engine, producing around 197HP from factory & averaging around 28MPG. Taking into account of 2,148KG and with the average MPG of a pickup truck on the UK roads around 18 - 20 MPG, Ford did a fantastic job of keeping their owner's fuel costs to a minimum.

But, there is always room for improvement when it comes to fuel economy tuning (See section ii.). 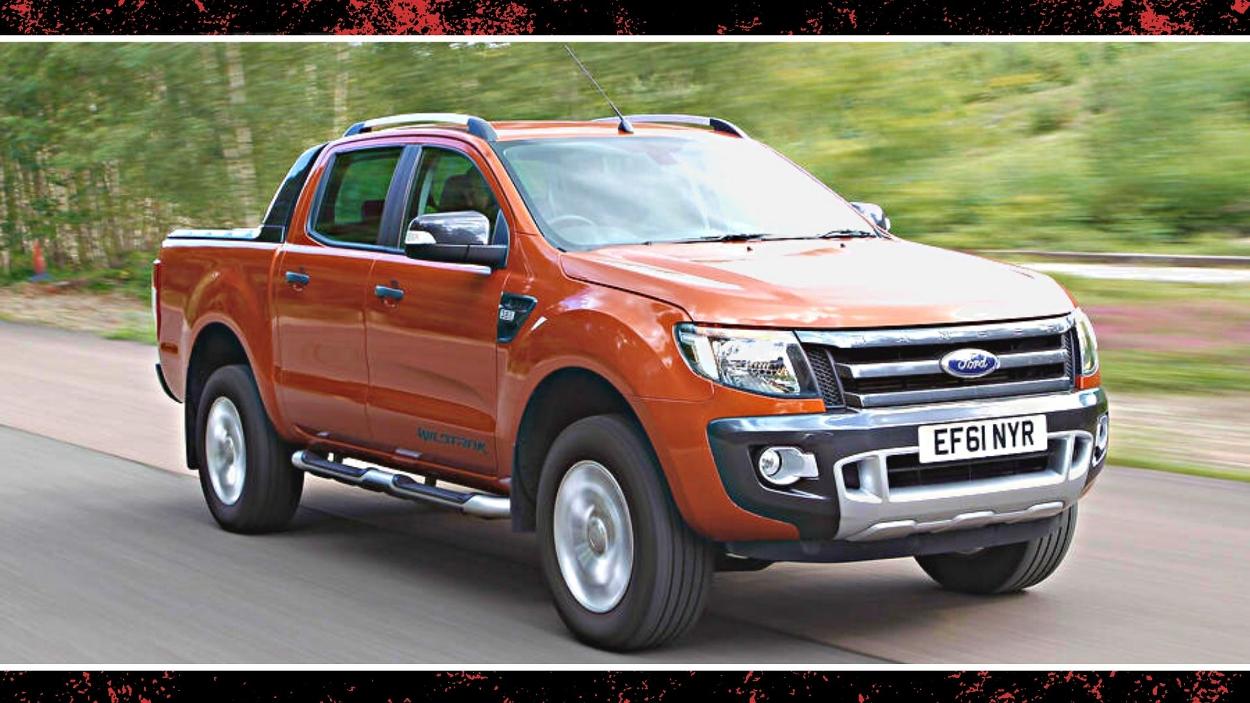 Using the Unichip Module, we are able to intercept and manipulate data transmission between your ECU and your engine's sensors - thereby creating a set of custom tuning files to maximise the potential of this Ford Ranger.

This customer opted for the 5 map package (more on our map selection), including an Anti-Theft, Standard, Towing, Performance and - you guessed it - Economy Map. Using his Ranger for work, he claimed prior to the installation that his truck would average around 400 miles per 80L of Diesel.

Using the Unichip's Fuel Economy Map, we now averages around 450 miles - a 50 mile range increase and an efficiency boost of around 12 - 15%!

But, in real world figures, what does this actually mean?

Let's work it out.

At the time of writing, the RAC concluded the average Diesel price in the UK was £1.91. They also suggested in 2021 that diesel powered vehicles over 3 years old average 12,500 miles per annum.

With Unichip Europe's Fuel Economy Map active, an annual saving of around £545.11 per annum is attained!

With Unichip Installations typically starting from around £650+VAT, you can comfortably expect to recuperate your investment back sometime with the second year of ownership, whilst still retaining the benefits of having an Anti-Theft & Performance map, too. 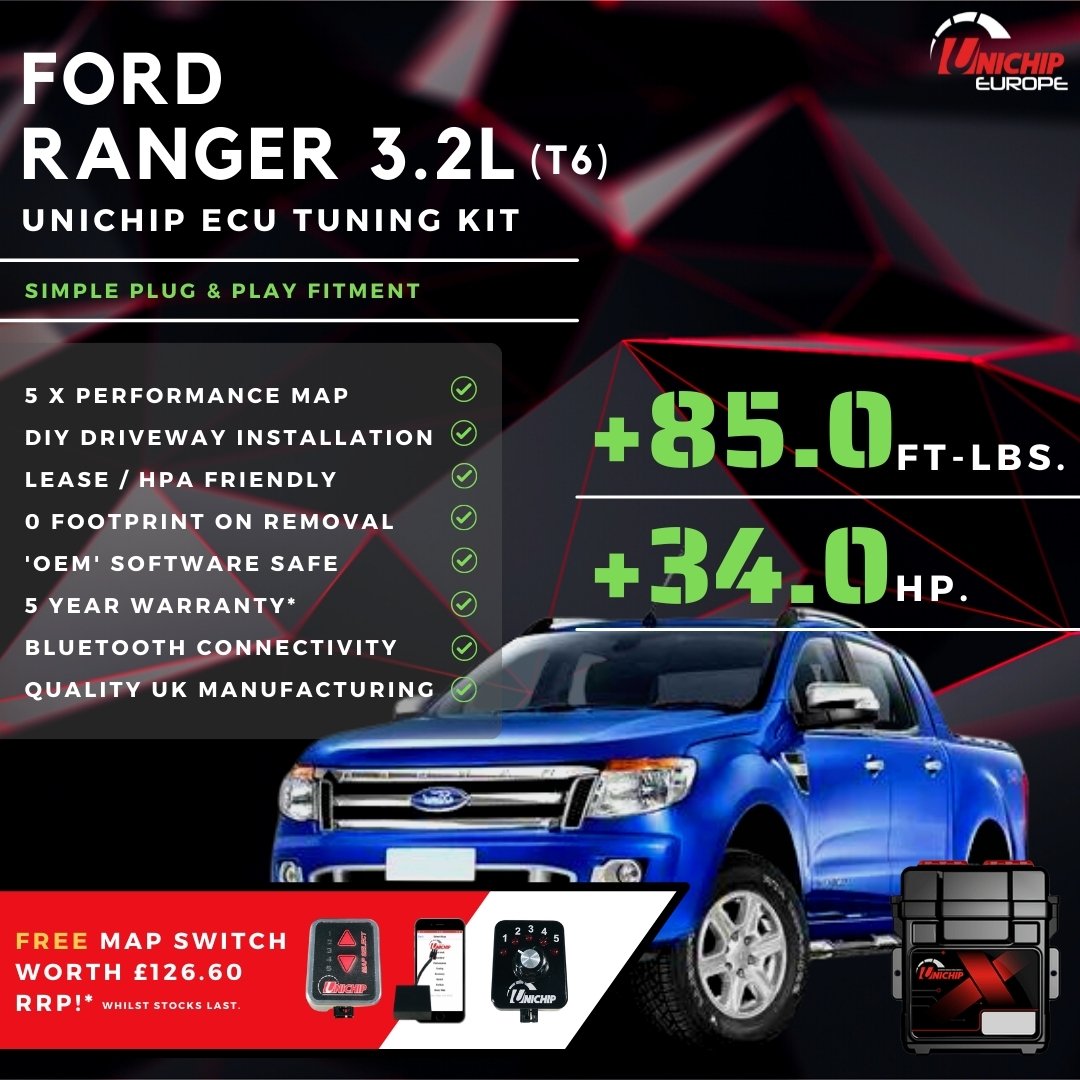 Capable of producing an extra 85 LB-FT of torque & 34HP, Unichip Europe's ECU Tuning Kit for the Ford Ranger T6 3.2L is not only designed to safely improve performance - it's designed with versatility in mind.

Take advantage of 5 uniquely written maps specifically created for your vehicle - all available to switch in real time, at the touch of a button.

Performance when you want it. Fuel efficiency when you need it. Security when you've parked it.

With very little evidence to suggest fuel prices in the UK dropping anytime soon, your annual spend on fuel for the foreseeable future is likely to keep punishing your wallet. And, in all fairness, from an economic perspective, it doesn't make much sense for the prices to drop despite massive concerns from drivers across the country.

Savings of around £500 per annum are viable with our particular case study, and with Unichip installations starting from £650+VAT, you can comfortably expect a 2 year ROI (return on investment).

So, if you've got no intention of buying an Electric Vehicle anytime soon, rack up the miles commercially or just wish to make your pride and joy considerably more fuel efficient whilst STILL retaining the benefits of a custom ECU tune, the Unichip Module is for you!

Get in touch with us today for your free phone consultation!